Just yesterday, one of the Year 10 rowers in Merton Hall Rowing, an Artemis Program, asked me the following insightful question:

She enquired: “Dan, why is it that we lift big, heavy weights when rowing is an endurance sport? Shouldn’t we be lifting lighter weights for more repetitions to replicate the sport of rowing?”

It’s moments like these – as well as seeing many of our 15 and 16-year old students lifting over 85 kilograms off the floor – that make me really smile.

Because, not only are we developing physically strong and resilient girls to help them thrive with the physical demands of schoolgirl rowing, but we are also fostering a culture of curiosity, ownership and learning.

In asking this question, this student showed me that she didn’t want to just do the work, but also, to know why it is important and how it fits into the greater rowing program.

Today, we’ll be discussing and learning about:

We’ll also discuss some examples of the strength exercises our rowers complete:

Why OUR GRAMMARIANS TRAIN STRENGTH

“Dan, why is it that we lift big, heavy weights when rowing is an endurance sport? Shouldn’t we be lifting lighter weights for more repetitions to replicate the sport of rowing?”

To which I replied: “That is a fantastic question. We lift heavy weights instead of light loads because of something known as ‘the top-down approach‘ to endurance.”

I went on the explain the following:

Every single time we do something in life – whether walking up a flight of stairs, lifting up a box to a shelf above us, or pulling on the oars of a boat, we are using up a percentage of our maximal strength.

When we get stronger, we are increasing our maximal capacity to create force – in other words – our strength ‘ceiling’ gets higher.

the top-down approach to endurance 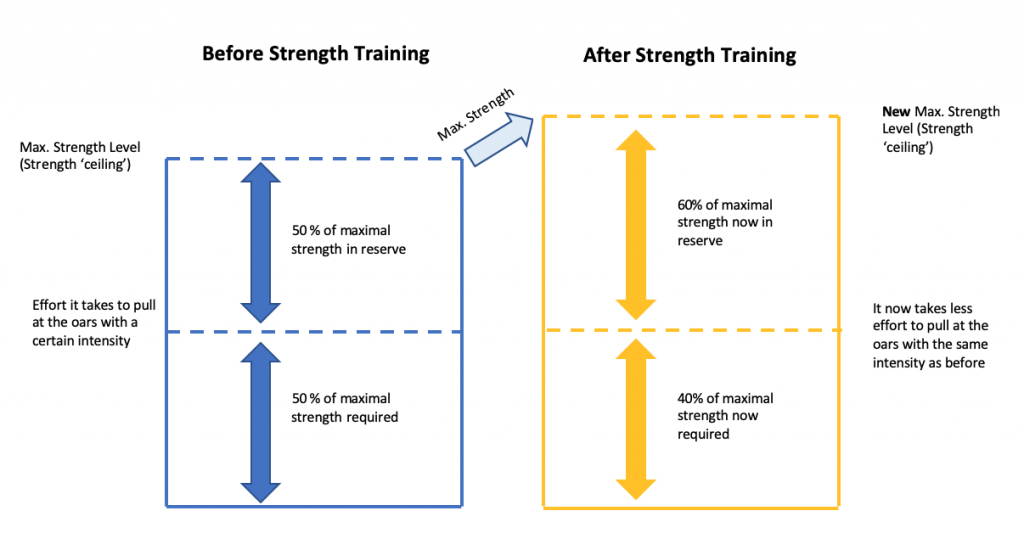 So by lifting ‘big, heavy weights’ for fewer repetitions instead of lighter loads for more repetitions, everything we do under our strength ceiling gets easier.

Why STRength training is important for rowing

Strength training gives rowers a plethora of benefits – many of which stem from the top-down phenomenon.

A stronger tissue can withstand more forces over longer time periods before it starts to fatigue, when compared to a weaker tissue.

In the longer term, this means that our bodies can withstand greater training loads, helping our rowers to be more resilient against injury.

If you can train more often, you also get to practice your craft more often, leading to a greater window of opportunity for improvement.

Our rowers have spoken of feeling more powerful, more resistant to fatigue – possessing a greater ability to pull on the oars at the same intensity for longer.

Their performances have dramatically improved since incorporating strength training into our rowing program.

A well-designed strength program will complement and reinforce the movements and positions required in the athlete’s sport.

For example, a deep squat replicates the catch position, a Romanian deadlift mimics the rockover, and a seated row imitates a strong finish position.

By both rowing and strength coaches understanding each other’s domain, the messaging between water and land training becomes synchronous and familiar to the students.

At the end of the day, the power to weight ratio is very important in the sport of rowing.

You need to be able to propel the boat forward smoothly, limiting drag and water-resistance as a result of a low-sitting boat.

Strength training leads to an increase in lean muscle tissue, increasing our force-generating capacity per unit of mass on our body.

Why movement quality needs to be pursued before adding load

There has been much discussion surrounding the safety of lifting weights for young bodies. Previous trains of thought have argued that lifting weights ‘stunts’ the growth of developing bodies, however, nothing could be further from the truth.

The Australian Strength and Conditioning (ASCA) have scoured the literature and are strong advocates for how a strength regime is fantastic for youth. This governing body has recently constructed its position statement on the matter, which outlines their specific recommendations for youth resistance training.

In our program at the Artemis Centre, we speak about ‘earning the right’ to progress or load up a movement. One must demonstrate high movement quality in a particular exercise before they can safely and effectively load that movement pattern with a bar, dumbbells, or kettlebells.

All effective strength programs are first and foremost centered around compound, functional movements, as these give you the best value for your effort and time.

You want to focus on pushing, pulling, hip-hinging and squatting movement patterns, as these lay your foundation.

Next, you want to build in accessory movements, such as rowing specific core and stability work.

Here are some examples of typical exercises we prescribe in our rowing strength programs.

The dumbbell chest press is an example of a pushing movement.

Other pushes we use include dumbbell shoulder press and push-ups.

The reason why this exercise is important for rowing is because it strengthens the muscles in our chest, such as the Pectorals and Serratus Anterior.

Having a strong chest wall is important in transferring from the lower body into the upper body and arms. It also helps us avoid rib stress injuries that can be common in rowing.

The seated row is an example of a pulling movement.

Other pulling movements our rowers complete include the lat pulldown, barbell bent-over row and pull-ups.

Pulling movements are important for rowing because they replicate the arms away portion of the rowing stroke. They strengthen our scapular retractors – the muscles that stabilise our shoulder blades, as well as our biceps.

Having strong retractors creates a stable foundation to transfer force into the oar when we pull and supports good posture.

The deadlift is an example of a hip-hinging movement.

Other hip dominant movements we use are the Romanian deadlift (RDL) and hip thrust.

Their inclusion is pivotal to our strength regime because they strengthen the muscles in the backs of our legs, namely our hamstrings and gluteals.

Deadlifting movements mimic the rock-over, or middle portion of the stroke. They allow us to powerfully extend our trunk and hips.

Deadlifts also work to strengthen the lower back musculature

BACK SQUAT TO BOX

The barbell back squat to box is an example of the squatting movement pattern.

We also use front squats from time to time in order to change up our squatting stimulus.

The deep squat closely mimics the catch position of the stroke, where we need to maintain a vertical pelvis, neutral spine, and explosively push force down into the footplate simultaneously.

The single-leg squat is a hip stability exercise that helps our rowers address any imbalances between the left and right sides of their body, challenging the hips and core.

These attributes are especially important during sweep rowing, where one must transfer force diagonally across the trunk.

Believe it or not, core training for our rowers doesn’t involve planks and sit ups, which have traditionally been prescribed in this setting.

A rower needs to be able to hold a relatively neutral spine and upright pelvis as they move their legs and hips up and down the slide, which requires a large amount of strength and mobility.

Doing so is pivotal in reducing the prevalence of lower back pain in the sport.

We prescribe finish position rockbacks to help our rowers maintain this neutral pelvis while rocking back and forth, which strengthens the hip flexors and lower back muscles.

At the opposite end of the stroke – the catch position – the same principles apply.

Whilst in this compact position, a rower must be able to maintain a neutral pelvic position. 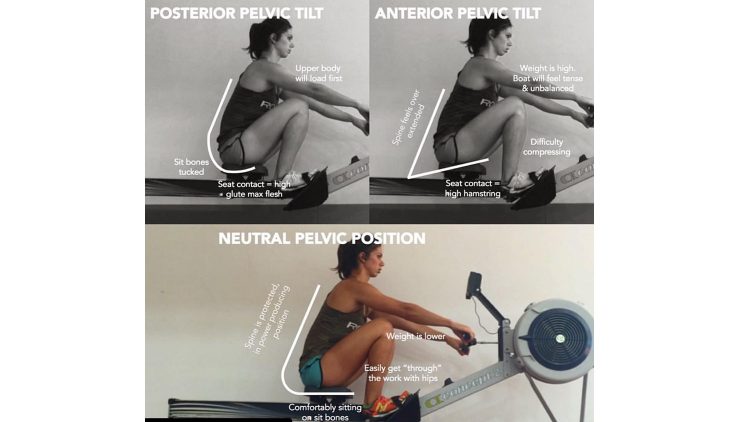 We prescribe a slow, deep squat pulse, which helps rowers to maintain this neutral pelvis.

As we mentioned earlier – in sweep rowing, a rower must be able to transfer force between contralateral sides of the body (left to right or visa versa).

We prescribe exercises including but not limited to the side plank, kettlebell suitcase carries and Palof presses in order to address this strength and stability requirement.

WHAT LOADS/INTENSITY SHOULD BE USED?

Here is what the ASCA guidelines recommend for loading parameters.

We use these guidelines to help inform how we load our rowers when performing their strength work.

Artemis Aquatics: How To Do a Tumble Turn