Artemis Gymnastics: All About Trampolining (Part I)

Artemis Gymnastics: All About Trampolining (Part I)

What I love About Judging

Katie Dunn joined MGGS in the role of Program Manager and Head Coach of our Gymnastics Program at the beginning of this year. Katie is a former gymnast and national level trampolinist, and current international level judge in Trampoline Sports.

In this two-part series, Katie generously shares her personal road to international judging. It’s a a fascinating insight into the skills required to be a good judge, what she brings to the craft, what is involved, and what she loves about it.

Last week I celebrated 10 years of national level judging at the 2019 Australian Gymnastics Championships in Trampoline Sports held at Melbourne Arena. I’d like to share a little about my experience and what it is that I love about judging.

I started officially judging in 2007 but began my judging journey long before when I was training as a trampoline athlete. I benefitted greatly from my coach, Belinda Cox (an Australian coach and judge), who applied a holistic approach to training. She instilled in us a desire to give back to our sport.

We judged each other at training with various scenarios, such as:

In addition, Belinda would set up mock competitions – in which I could never keep a straight face when my teammates imitated judges from around Australia to rattle me!

I quickly discovered that judging was a natural fit for me. I found the rules to be logical – which resonated with my maths-science leaning brain – and my capacity to notice and remember details worked in my favour. I was in my element, and like all things we are passionate about, I spent hours practicing and honing my skills on YouTube videos which saw me quickly progress through to National and then International level qualifications in 2013.

To me, a strong judge can consistently recall the relevant rules and know when to apply them under pressure and time constraints. The nature of trampoline brings some unique challenges to judging; each skill is required to be linked without interruption, which gives judges zero time to second guess or deliberate. I thrive on this type of challenge!

How do we get better at our judging skills? 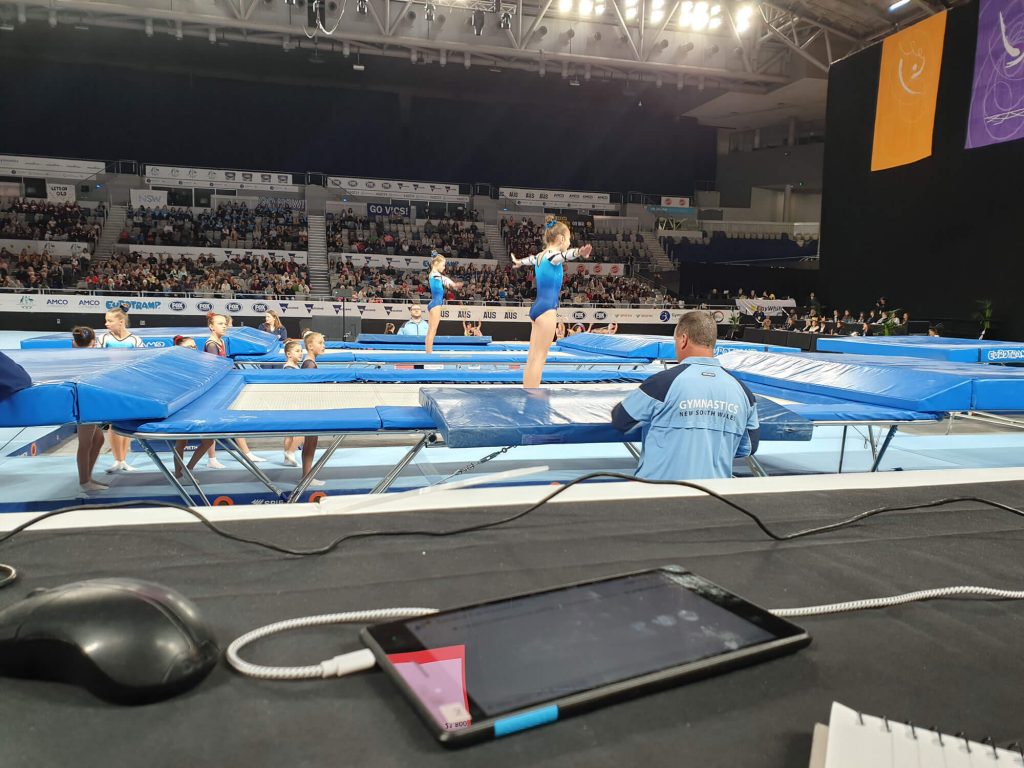 Through deliberate practice. At our International qualification courses, we train our eyes through slow-motion video replays, discussing and analysing each shape, angle and twist until we can easily identify the four main components of judging in real time. This type of training is a constant in our preparation and then amplifies in the lead up to a major competition. At World Championship events for example, the judges come together before the competition to practice until every judge is aligned in their knowledge of the International Gymnastics Federations Code of Points (FIG COP) and their interpretation of the rules.

What the sport of trampolining has given me

As the saying goes: “What you put in is what you get out.” Yes, I have invested a lot of passion and time and energy into this sport, and I am thankful for the rewards flowing back to me in return. I’ve highlighted a few examples.

Trampoline is a relatively small sport with an incredibly friendly, selfless community. This sense of community is very much brought to life at Nationals. Looking around the arena, you’ll see friendly and caring parents, state team managers and chaperones supporting all athletes, and the athletes themselves all yelling chants for each other. Everyone wants the best for everyone. The physiotherapists and medical team will treat any athlete (regardless of state), the coaches collaborate, shake hands and share ideas with each other, and judges will often approach coaches to make a quiet but powerful suggestion to give competitors the best possible chance of performing to their best. In one instance, this advice led to a change in routine for a synchronised pair which meant they avoided penalties and won a National title!

Our sport is also focused on creating excellent Australian teams, and our encouraging environment helps create longevity and involvement in the sport. I’d like to share some heart-warming stories which illustrate this point:

Adrian Wareham, PDHPE teacher from Victoria, competed at his 47th National Championships at the age 55 this year.

New dad to a 1 year old little boy, Ty Swadling from NSW won the senior men’s title at the age of 30.

2-time Olympian Blake Gaudry from SA returned to Nationals from an extended injury break and received a strong “we love you ‘coz you’re Victorian” chant, as the Victorian team acknowledged his split life of working and training in Melbourne, as well as his home in SA.

NSW/QLD couple Aiden Thomas and Kaitlyn Perkins bookended their wedding festivities one week either side of Nationals.

Our sport has passionate people who find solutions to pursue their dreams.

I love numbers, details, and trampoline rules make logical sense. There is a simple method to scoring well in trampoline – jump the highest, be the neatest, stay in the middle of the trampoline and do enough difficulty to outscore your competitors – but ample opportunity to have an effective strategy over the course of an athlete’s career.  Our rules also reward safety and great technique and help prevent unmastered skills from scoring highly.

It Supports My Coaching and Trampoline Goals 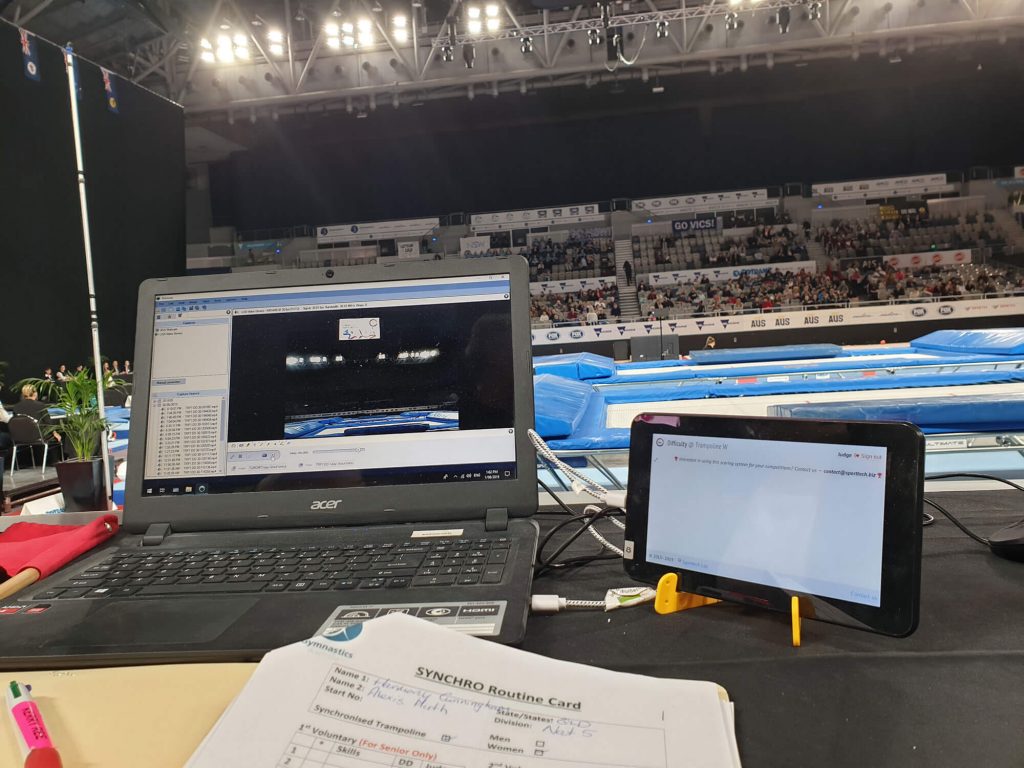 Judging helps me to view my athlete’s training and performances from a different perspective. It allows me to coach correctly from the start, and to coach neater skills that score better. I teach my athletes the rules, so they know what to expect in a competition. For example, whether it is better to step or fall, as well as being educated on what each component of scoring means.

I use drills and games like ‘stick it’, ’40 points’, and ‘Taller, Straighter, Neater’ to reinforce our rules.  I judge my athletes in training, and this gives them an indication of their progress against their goals in a known space. Judging also provides a service to my club and fellow coaches, as we share the coaching and judging duties.

I love the pressure of getting it right when judging. It’s imperative to know the rules intrinsically and to trust your judgement. I had a testing moment as a Degree of Difficulty (DD) judge during the finals at the 2018 World Age Group Championships. A Russian athlete changed his passes on the double mini trampoline from the routine card and performed a flawless 822 / (straight) dismount. My other DD judge, who also happened to be Russian, wrote 822 o (tucked), which is 0.8 points lower in difficulty. We had no video replay available to us – it was only available to the FIG Technical Committee who oversee every score produced from the main judging panel in the arena. Getting this decision wrong – especially on a Russian athlete in Russia – would have been disastrous for my reputation. I was confident in my decision and stood my ground, publishing the score for 822 /.  I was correct, but that situation definitely got my adrenalin pumping!

It Gives Me Opportunities to Travel and to Represent Australia

I’ve judged for Australia in Napier (New Zealand), Florida (USA), and in St Petersburg (Russia) – places that weren’t even on my Top 10! These opportunities allowed me to link in some personal travel time and further the connections I have made with people along the way. In America, I met people who invited me to stay and visit their gym in California. In New Zealand I gained an extra week with my Mum after a bike accident kept me from flying home. And travelling through Europe after Russia justified the price of plane tickets, and let me explore Austria, Germany and France!

Click here to read Part II all about Katie’s experiences judging at the 2019 Australian Gymnastics Championships in Trampoline Sports held at Melbourne Arena.

Handy Hints For Handstands At Home

7 Benefits of Gymnastics Classes for Kids